The Darling lots of May!

THE DARLING LOTS OF MAY!

May the 20th and 21st saw Fieldings Auctioneers return to the rostrum with our first auction since the Decades of Design sale in early March. After such a long time away from the gavel Nick and Will were ready and raring to go!

Observing the restrictions in place from government Fieldings went forward with their first behind closed door, online only auction with over 850 lots on offer. With a slightly reduced team and observing social distancing rules we utilised the online selling platforms to bring the sale right in to the homes of our clients both old and new!

In the run up to the sale it was clear that the buyers were excited to see us back with condition reports flooding in from all over the world. The sale included the usual array of items including ceramics, glass, silver, jewellery, paintings, collectables toys and furniture!

Over two days and with more than 12 hours of selling the sale was a fantastic success with over 1584 bidders registered over the two online platforms with 156 successful bidders being overseas. The final sold rate was a wonderful 85% with the final hammer total being 46% above the bottom estimate. There some fantastic prices achieved……here are just some of the highlights!

As always the ceramics department offered a huge selection of lots with estimates ranging from just £30 up to £2000 so with so much choice on offer the department saw an incredible sold rate with nearly every lot finding a new home with a huge number selling well over estimate.

One of the expected top lots was a large Royal Worcester Pomander and cover estimated at £2000 to £3000. The piece was a contemporary piece but decorated very much in the traditional Royal Worcester taste by M. Powell with a country lane with cottages and a lady tending to geese, two gentlemen in conversation beside their horse and to the other side, a mother stood with her young family before farmyard building, signed, gilt mark, height 37cm. The piece attracted a great deal of interest and eventually sold to a buyer in Australia for a hammer price of £2400. The piece will be making its long journey very soon to its new home down under.

One piece that more a surprise on the day was a late 19th Century Copeland blue and white garden or conservatory seat of hexagonal form decorated in an all over blue and white transfer landscape pattern, unmarked, height 47cm. These garden seats are rare examples of Copelands production and echo the examples which were being imported from China over the 18th and 19th Century. Estimated at a modest £150 to £250 the piece saw an intense online bidding battle between two determined collectors keen to secure this piece. The final selling price was £1850 hammer, our guess, it probably won’t be heading for the garden despite the good weather!

As always the Asian department offered some sale highlights with the interest in pieces attracting bidders from across the world including a number of strong buyers in mainland China. The two pieces which attracted most interest were a Chinese 'Teadust' glazed vase, of meiping form with short lug handles, the shoulder and body with a series of ochre coloured horizontal bands, before a dusted rich green ground, 29cm high, drilled mark to base, possibly a Yongzheng mark (1722-35), secondary paper label to base with written number 30.

This piece had been consigned from a client in Birmingham who remembered the vase from his grandparents home when he was a child in the 1970s. The vase was at some point converted to be used as a lamp and sadly had been drilled right through the reign mark, making it very difficult to identify the date. Our Asian specialist felt the vase was possibly Yongzheng and it seemed the buyers agreed. Carrying a pre-sale auction estimate of £1500 to £2000 this price was quickly eclipsed selling for a hammer price of £5400

This had been purchased by the client in Hong Kong as a souvenir of a trip and came with a copy of the original purchase receipt. A beautiful example it soon ran on from its £400 estimate to sell for £3700

With bullion currently running at an all time high the base price of all the lots in this department has increased strongly against earlier provided estimates. The current ‘gold rush’ was felt very string here at Fieldings with a near 100% sold rate across both departments! With only a very small number of lots going unsold estimates were being smashed as Nick took to the rostrum to sell his departments lots.

One of nicks favourite lots which we featured ahead of the sale were three hallmarked silver gilt studies of Spiral-horned Antelope heads, possibly intended as knife rests,  and made in 1985 Asprey & Co Ltd. Estimated at a modest £150 they leapt their way to a final hammer price of £550!

As expected across the jewellery section prices were high with some classic and elegant diamonds fetching various prices from £1250 to £2000 however of more surprise was a beautiful 18ct hallmarked open faced, crown wind pocket watch with stop watch facility Roman numerals to a white enamelled dial, movement marked Hardy Bros, London, originally estimated at £600 to £800 in keeping with the gold price at time of consignment it ran away to finally settle at £1750, a number of other gold pocket watches followed suit realised often three times thier original estimates. Gold sovereigns also flew to new saleroom highs fetching an average of £360 hammer price each, well up on previous auction room prices.

Interestingly this department saw a surprise return to favour of more traditional works. For a while now 19th century art has been a little our of favour against the rise in popularity of modern works however at Fieldings May sale this trend seemed to have been turned on its head with the top selling lots all very much in the 19th Century taste.

The highest lot of the day was a very good work by Clarkson Stanfield RA, depicting an estuary scene with tender loaded with booty from a captured Dutch ship, oil on panel, signed and dated 1831 on buoy, framed, 45cm x 63cm. There was a great deal of pre-sale interest and the work sold for £2600 against an £800 estimate. This was closely followed another coastal landscape by an unknown artist which ran away to realise £1100 against a £200 estimate. This trend was repeated right through the section of the sale with everything from traditional still lifes to landscape scenes all fetching string sums in the high hundreds and low thousands….does this mark the return of the traditional work.

Finally the furniture department closed the sale and rounded things off with a surprising bang! For some time now there has been the talking down of ‘brown furniture’ which has resulted in lower estimates across the auction world. Maybe low estimates proved enticing for the bidders, but what ever the reason they worked their way through the section of the sale with some serious bidding with some prices seeing a return to old days.

A mid 19th Century Italian specimen marble games table top of circular form by Salvatore Lopes, the coloured chequer board with a geometric band and border, bearing remnants of paper label verso '...marme di Sicilia, .... SALVATORE LOPES..', raised upon a turned rosewood baluster carved pedestal and tripod legs terminating in scroll feet was the top lot of the day selling for £1400 hammer against its £1000 estimate.

There were other classic pieces in the sale also attracting strong interest but in keeping with more modern trends two more contemporary interior pieces performed as expected. A pair of mid 20th Century oak veneered ply and beech haberdashery cabinets, both bearing a trade label for 'A.F. Corbett & Co Ltd, Shopfitters and Showcase Makers, 32-36 Hill Street, Birmingham’ were fiercely fought over! Having been consigned by a lady who was closing down her haberdashery shop they were saved from going on the skip! A fortuitous phone to check before they were smashed up and slung out resulted in a surprise £1050 hammer price for the vendor….to say she was pleased is something of an understatement!

For a full run down of the final sale results head over to the auction results page where each sold lot is listed. Our next sale will be on the 23rd and 24th of June and we are very excited with the lots on offer. Highlights of the sale will be on the website very soon.

Do you have something you’d like valued or are thinking of selling? If so please don’t hesitate to contact us as we’d be happy to offer our advice and assistance. 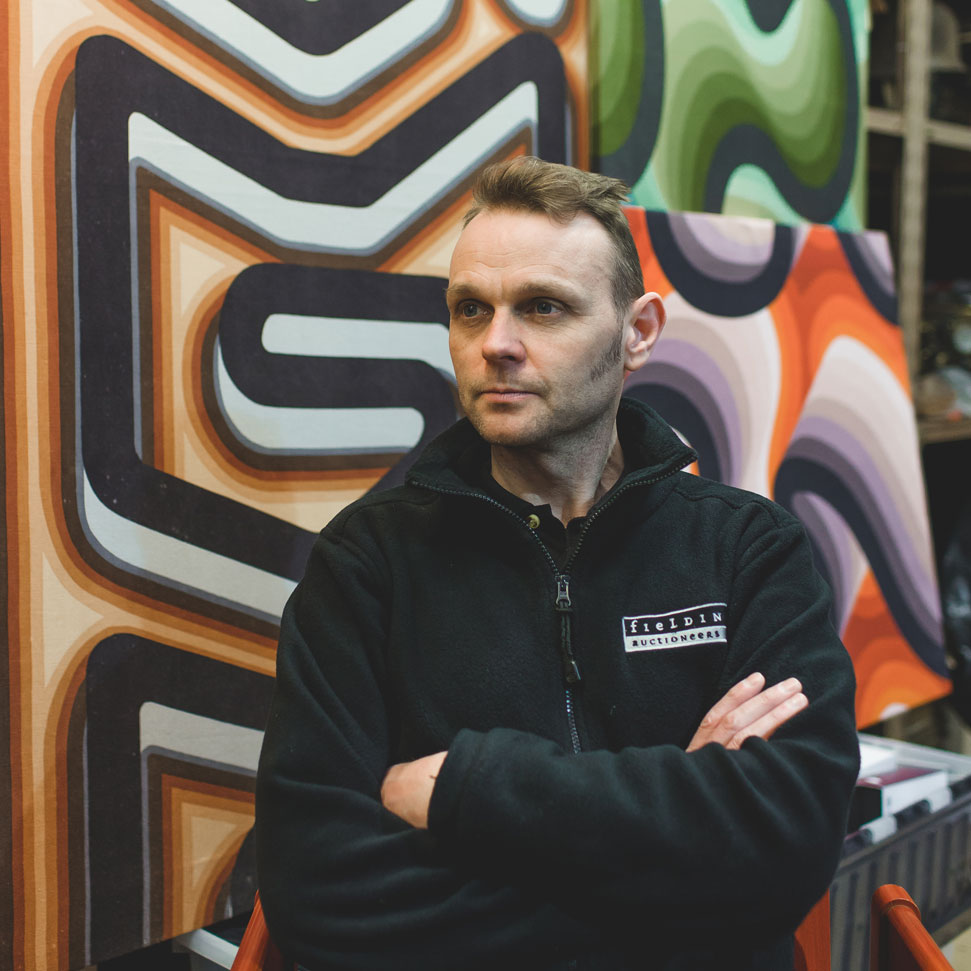